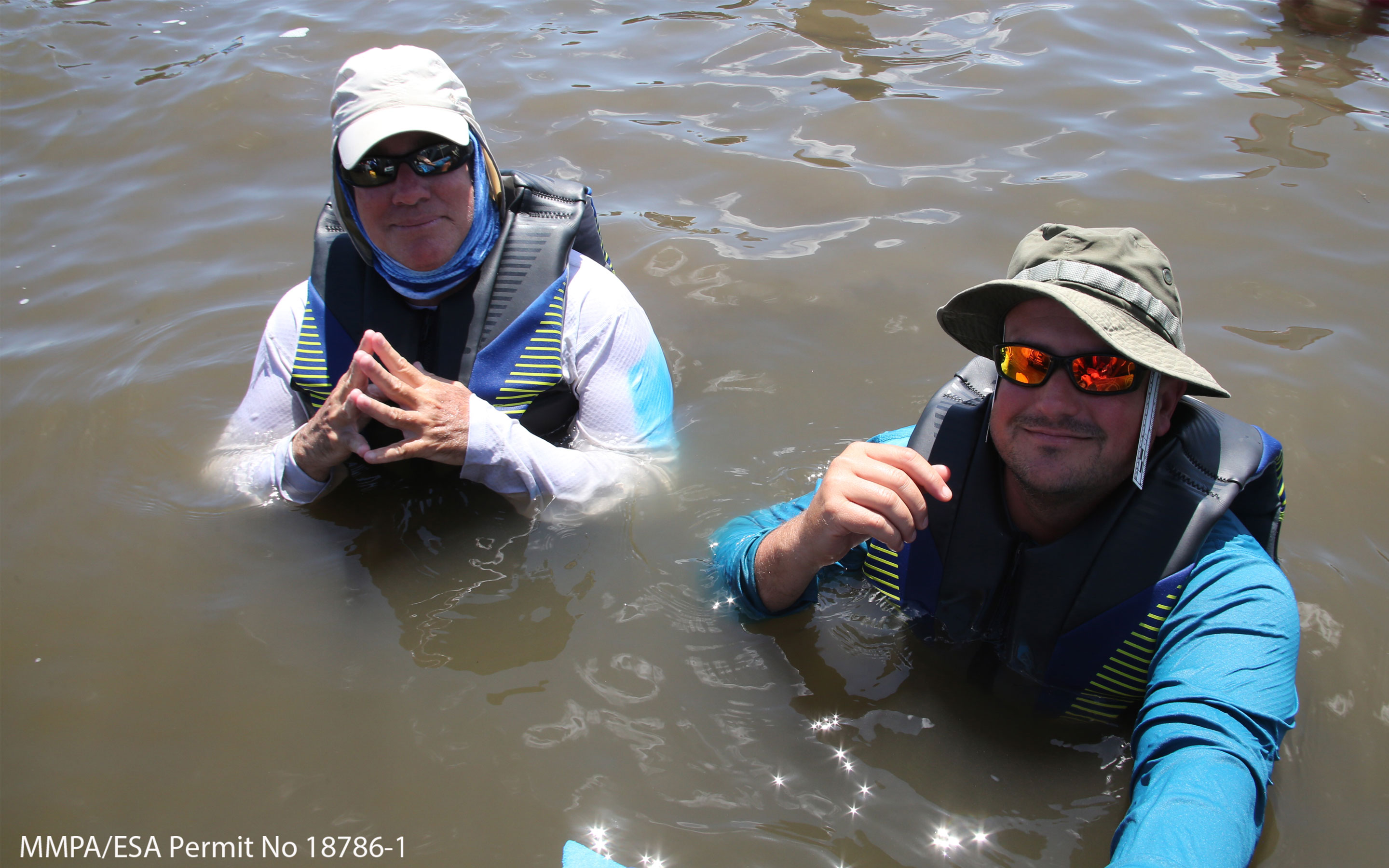 It is the beginning of fieldwork season, so we thought we would highlight a CARMMHA consortium researcher who has been a pioneer in bottlenose dolphin research, including health assessments, since 1970. Please read on to learn more about Dr. Randy Wells, of the Chicago Zoological Society’s Sarasota Dolphin Research Program, in his own words…

1. What is your role in the CARMMHA consortium?

As a Co-PI, I’m involved primarily in running the research operations on the reference dolphin population in Sarasota Bay, Florida, being studied for comparison with the other two populations in Barataria Bay and off Dauphin Island.

2. Can you describe the specific primary objectives of your research?

We’ve developed a decades-long monitoring study with a long-term resident population along the central west coast of Florida, and this allows us to put together reference information and establish baselines for comparisons with other populations that are perhaps more at risk than the Sarasota Bay population. So Sarasota dolphins have been used as a reference population in terms of health parameters, population dynamics, and other aspects of their biology around much of the Southeast US, not just with the Deepwater Horizon oil spill, but also with unusual mortality events and other situations such as where high concentrations of contaminants have been found. So, when we are between projects such as this, we continue to monitor the population to make sure that we have consistent, continuous databases to be able to inform comparisons that are done with the at-risk populations.

3. What have been your most important findings so far?

We were involved with the Deepwater Horizon investigation for the NRDA project from the very beginning. Among our responsibilities was providing information from the Sarasota Bay bottlenose dolphins for the health assessment and population dynamics comparisons, because Sarasota Bay dolphins were not exposed to oil. We were also responsible for doing the satellite-linked tagging and tracking of the dolphins in Barataria Bay. One of the most important things we found early on was an extremely high degree of site fidelity of the dolphins in the Barataria Bay area. Barataria Bay was their home. They would not go very far outside of that bay. That has all kinds of implications in terms of their exposure to oil. We can’t say whether those individuals were there during the spill necessarily, but we can now talk about how much they were there after the spill and how much they would be exposed to whatever oil was still in the bay after that time.

4. Why do you think it is important to be a part of this consortium?

This is an amazing consortium. This is a dream team of researchers, as others have said. It’s the people that can bring their expertise to bear, and most efficiently and effectively determine what the impacts are on animals, how long those impacts are lasting and determine what we should be looking for in other situations in the future.

5. Why is marine mammal health research important for ocean conservation?

Where we work in Sarasota Bay, Florida, we deal with dolphins that are multi-decadal, multi-generational year-round resident dolphins. Some of those dolphins are more than 67 years old and have likely been there longer than I have, and I went there in 1969. These animals, we say they live in our backyard, but we actually live in their backyard. They were there before any people were living along the coastline. And so these animals are being affected by the environment that we share with them. The air that we breathe is the same air that they breathe. The water that they swim through and are in contact with is the same water in which we swim. The fish that they eat are the same ones that we catch. So, these things that are important to us are also important to marine mammals. But things that change the ecosystem, that harm environmental health in coastal waters, are going to impact the animals that live there before they impact us, as their neighbors. It is important for us to monitor them as basically the canaries in the mine shaft. And the other side of it is that we really care about them, and we want to make sure that whatever we do to try to conserve these animals is something that will benefit them, and will lead to lessons that can be shared to prevent similar problems from happening in other places.

6. What would you tell children about the importance of protecting our oceans?

When I got started in this field many, many years ago, the work that we did would be like opening a Christmas present. These animals had not been studied systematically in the wild before… you couldn’t see what was happening underwater, everything was new. From the start, it was amazing to be able to learn about these animals in their natural environment… I’ve been working with one population for 48 years and it hasn’t gotten old. The things that we can learn about these animals are still fascinating. We are still unraveling their lives. We are still learning what is important to them. The lessons that we have learned about what is important to them are take-home messages that need to go to our children and our children’s children. To lose these animals and the role they play in the ecosystem, to lose the excitement that goes along with unraveling the mysteries of these animals and the lives that they lead in our own backyard, but out of sight of us most of the time, to lose that richness this brings to our lives, would be horrible. Once they are gone, the ecosystem changes and that’s bad for everything.

I look at projects like this, research projects that have a strong outreach component, as being the right way to do this kind of work. Scientists collecting information and sharing it with colleagues and agencies is a necessary approach, but it is really the people that this work affects. Being able to get the word out to the public, to the people who are sharing the coastlines and the waters with the dolphins is the most important thing we can do.

Charleston Screening of Dispatches from the Gulf 2

Barataria Bay Field Update 7: Getting to Know our Research Fleet