Our second day of CARMMHA health assessments was smooth and productive. 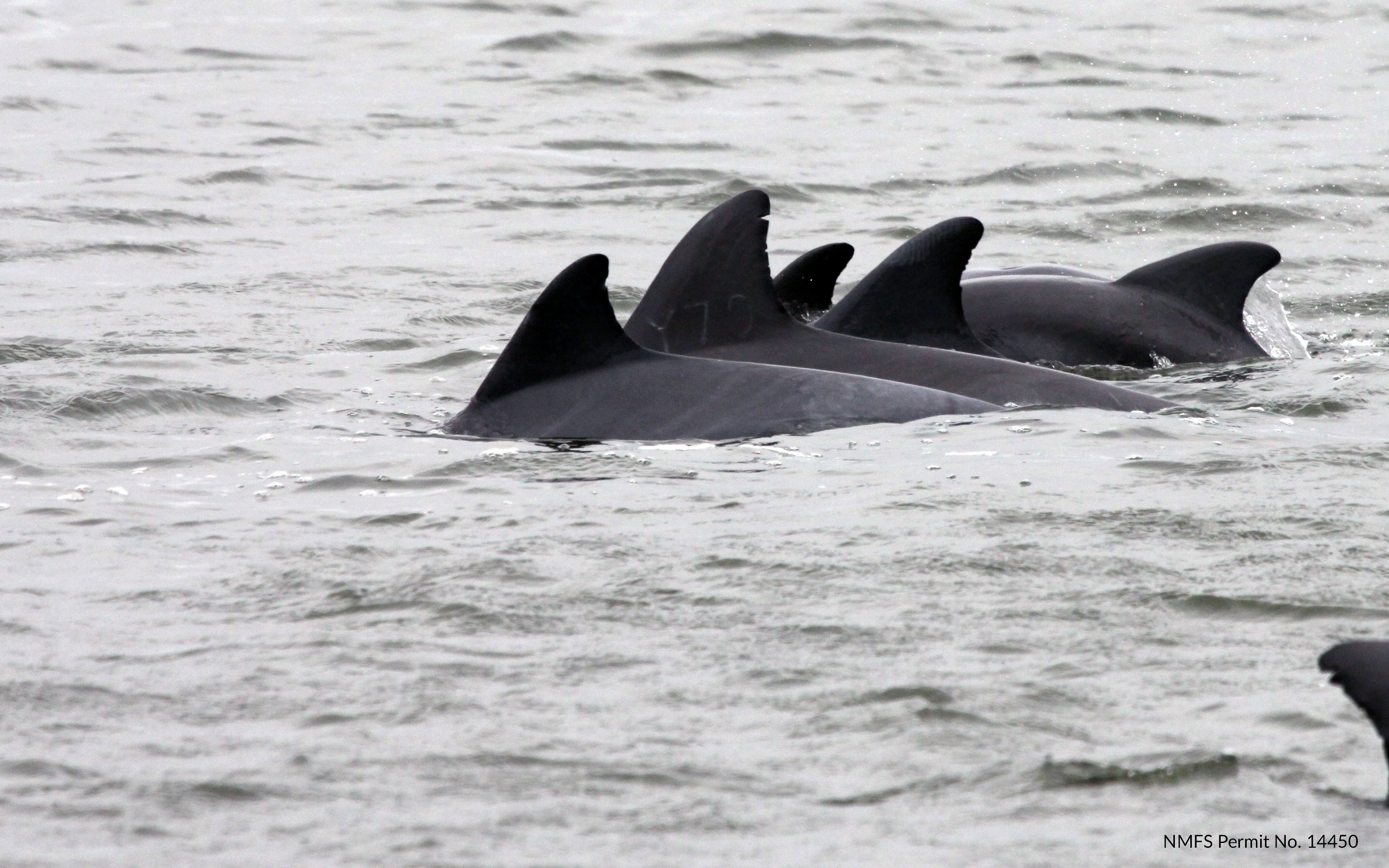 The forecast for today was pretty gloomy when we checked yesterday, but by the time we woke up and were on the water, we were treated to an overcast day with a pleasant breeze that kept it cooler than usual. The team is finding our rhythm, and we’re settling in for the grind that is fieldwork. Today, we’ll tell you about how our expert’s transition from identifying an animal we’d like to work with to deliver the animal to the veterinarians.

Once our capture lead, Eric, finds dolphins that we’re interested in, he works closely with the operators of three other boats to watch, identify, and safely capture the dolphins. The team waits until the animals are in an area with shallow water and good footing so that the animal handlers can safely work in the water without unnecessary risk to our folks and the animals. Once the dolphins have moved into a good location, the catch boat encircles the animals with a 400-yard long net (similar to a gill net used for fishing), while the other three boats (dolphin handling boats) carefully watch the net during and after setting.

This afternoon, for example, we set the net around two juvenile males.

Right away, one animal swam into the net, and one of our dolphin handling boat teams responded immediately, moving to support him and then pulling him out of the net to await veterinary assessment and sample collection. While they carefully maneuvered the first animal away from the net, the second animal swam into the net at the other side of the compass (what we call the net circle once it’s set), where a second dolphin handling boat team quickly removed the animal from the net. It can take anywhere from 4-10 dolphin handlers to safely hold a dolphin and keep them as comfortable as possible while the highly skilled veterinary team assess the individual and collect samples. The veterinarians (2-4 per animal) monitor, evaluate, and collect data/samples from the animal.

The next day,  we worked with three animals: a first-trimester pregnant female and two juvenile males. We captured the males together – we first ‘met’ one of them when it was in its mother’s womb during the time of the DWH oil spill. He was subsequently born in 2011 and our team assessed his health in 2013, 2014, and 2016. At the time, he had no teeth and showed signs of pulmonary and liver disease.

We’ll go into more depth about the role of veterinarians in the next post!

How do dolphins get a cold?

Why do dolphins squeak?

The squeak you hear is actually a whistle and dolphins can communicate via whistles. They each have their own signature whistle that is considered their “name.” They also make lots of other whistles that we’re still trying to decipher, but it is generally believed that there is a lot of communication happening.

About this field update

The CARMMHA Barataria Bay Health Assessment wrapped up last month! The team spent two weeks on Grand Isle, LA and had a very successful fieldwork effort. During the trip, CARMMHA Research Coordinator Ryan Takeshita (with plenty of help from others on the team!) kept a field journal to share here on the CARMMHA website. Over the next two weeks, we’ll post daily blog entries from that field journal. In some of the entries, we have a Question and Answer section with marine mammal veterinarians responding to questions from Evie, a four and half-year-old scientist in training from Ellicott City, MD. We hope you enjoy our field updates!