It’s the last field day of our first week, and we’re feeling good about how everything is going with the CARMMHA Barataria Bay health assessment fieldwork.

All of the boats are back in working order. It was another good weather day (we have been pretty lucky weather-wise this whole week), and we evaluated the health of four animals.

In addition to collecting ultrasound images, echocardiography, and blood/tissue samples, our field biologists use the capture-release opportunities to attach satellite tags to some of the animals. This allows us to remotely track animals after we release them! When an animal with a tag surfaces, the tag transmits the animal’s location to a network of satellites, resulting in a data set of when and where each animal moves over the course of several months. 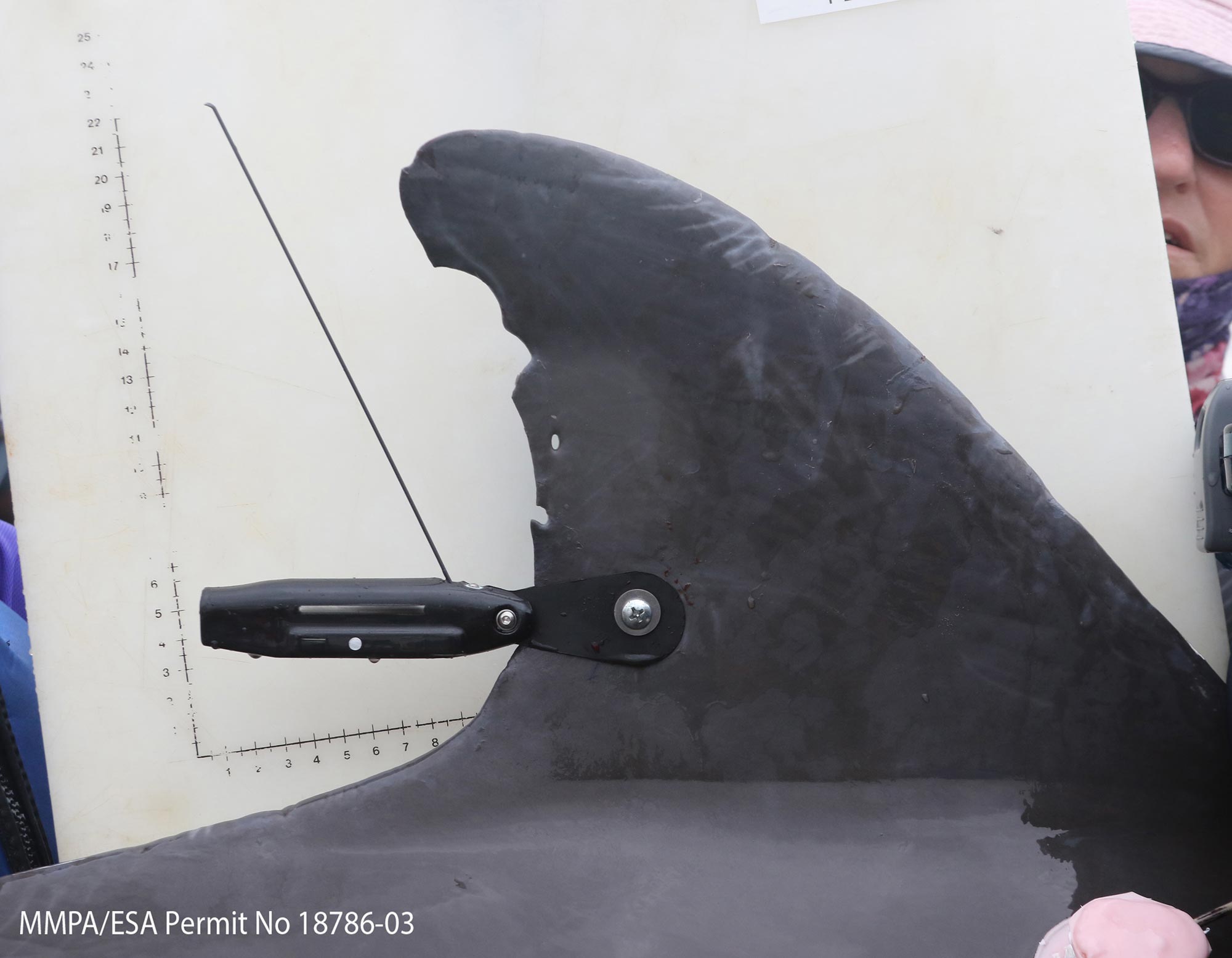 These lightweight tags have been modified over the past 20+ years with the primary goal of minimizing the impact on the tagged dolphin while maximizing the resulting data.

The current generation of tags are quite aero- and hydro-dynamic and sit just behind the dorsal fin to minimize possible drag on the tagged dolphins. Hopefully, each tag continues to work for 3-4 months, but there are a variety of reasons a tag could fail before then. Other dolphins or animals may unintentionally break the antennae, or even worse, the entire tag, or prematurely cause it to come off the fin. The tags may suffer a mechanical failure, or stop working when algae or other bio-growth grows over the tag body/antennae. At the end of the tag’s life, it may pull through the dorsal fin leaving a notch or may pop off the dorsal fin and leave a well-healed hole that researchers can use to identify the animal in the future.

We can investigate a variety of interesting questions using data about when and where each animal moves.

Do dolphins spend time in subareas within the bay, or do they move throughout the entire bay? If we catch and release animals together, do those animals stay with each other for a long time (e.g., bonded male pairs), or do they separate and go their own way? Are there any parts of the bay where there don’t seem to be any dolphins? Are there other sections where dolphins concentrate? If we have data about water temperature or salinity, we can analyze whether animals move in relation to changing environmental conditions (or even pollution events). If we compare the movement data to the health assessment data, do we see any changes in movement patterns whether an animal is seemingly healthy or sick?

Satellite telemetry data is an important tool for wildlife biologists to understand what animals may be doing when we’re not able to watch them, especially marine mammals! We’ll talk more about satellite tags during the CARMMHA Dauphin Island health assessment, and how the tags can help resource managers differentiate different populations of animals (i.e., stocks), even if taxonomically they are considered the same species.

Tomorrow is an off day to let the researchers and dolphins have a break, but we’ll be back the next day to talk about some of the different analyses that happen here on Grand Isle in the evenings (with the ultrasound data) or back at the various analytical labs across the country!

Today we captured, assessed, and released four animals: two adult males, two juvenile males (the four of whom ranged from 210 to 259 cm in length), and a single juvenile female. We decided to release the female before completing our normal suite of assessments, due to a prolonged elevated heart rate and occasional ‘chuffs’ (short, strong exhalations from the blowhole, that can be a sign of agitation or respiratory distress).

How does trash get into the ocean?

What does trash do to dolphins?

Some animals can get entangled in the trash: it can wrap around their bodies or heads and can get caught on their fins or flukes, so that it cuts into them, in turn causing damage, especially as they grow. Or they ingest the trash: they can eat it because they think it’s food, and if it gets in their stomach it can cause problems. That’s why we don’t put trash into storm drains or oceans or rivers.

About this field update

The CARMMHA Barataria Bay Health Assessment wrapped up last month! The team spent two weeks on Grand Isle, LA and had a very successful fieldwork effort. During the trip, CARMMHA Research Coordinator Ryan Takeshita (with plenty of help from others on the team!) kept a field journal to share here on the CARMMHA website. Over the next two weeks, we’ll post daily blog entries from that field journal. In some of the entries, we have a Question and Answer section with marine mammal veterinarians responding to questions from Evie, a four and half-year-old scientist in training from Ellicott City, MD. We hope you enjoy our field updates!

Dolphin movements tracked by satellite in Gulf of Mexico